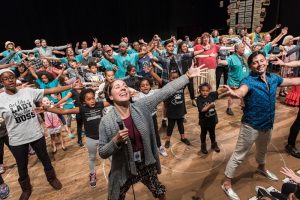 Seattle Rep‘s inaugural Public Works Seattle production ofThe Odyssey in September 2017 invited over 100 community members to be part of a professional theatrical production for the first time. It was reported to be “an experience I will treasure in my theatrical heart for years to come” by Jay Irwin of BroadwayWorld.com and “an open-hearted, energetic, and wonderfully lo-fi show” by Gemma Wilson of City Arts Magazine. It is with great excitement now that the Rep announces its next Public Works Seattle production – coming in September 2019, Seattle Rep will be producing a musical adaptation of Shakespeare’s As You Like It, continuing its mission to create theatre of, by, and for the people.